I’m Hazel from Singapore and I had the most wonderful opportunity to be at Toucheng Leisure Farm over the past 2 weeks. I first met Tina and Hunter at a sustainable tourism event in Thailand, and they left a very strong impression on me with their warm hospitality.

If you have been to Singapore, you would know that we are largely a city and have very minimal agricultural activities.

Coming to Toucheng has brought me into a whole different world in terms of the natural environment.

One of the great things about the farm is how it has managed to maintain itself as a great environment for wildlife. Although the farm owns 120 hectares of land, only a small part this mountainous land has been developed, leaving majority of the forest untouched.

This has made it a good study ground for naturalists, and one group of volunteers regularly visit the farm to survey the frog diversity and population.

The survey is done at night and some of the farm guides with keen interest in wildlife also join in the night walk to help out and learn from the volunteers. 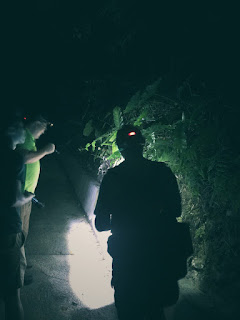 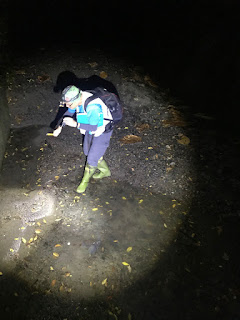 On the night walk, I learnt a lot about the species unique to Taiwan and the stories of how some non-native species of plants and wildlife entered Taiwan with colonialists. Nature and history lesson weaved into one night!

During the walk, we took torches and tried to spot frogs along a designated route. Every frog and species we spotted was recorded, along with other interesting observations. The frog survey volunteers will also share its findings and feedback to the farm for mutual learning. 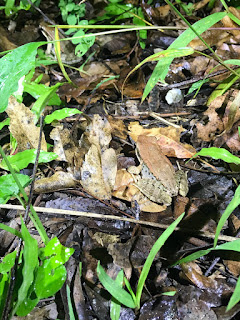 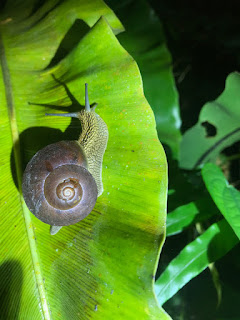 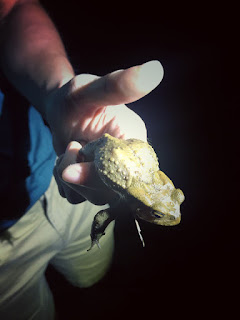 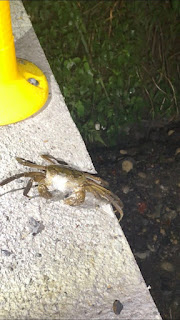 Some of the species we spotted at night: Leptopoma Perlucida (small snail with a bright green shell), Giant Africa Land Snail brought into Taiwan by British colonialists as a protein source, endemic species Nesiohelix Swinhoei named after English Biologist Robert Swinhoe who discovered it, LaTouche’s Frog, Central Formosa Frog, Chinese Mitten Crab making its migration down river for mating and even the Brown Spotted Pit Viper.

The diversity of natural prey and predators is a good indicator of the ecosystem’s health, and helps to keep the ideal amount of plants and organisms in balance.

We also spotted fireflies which felt really magical in the pitch darkness of the forest. If you happen to be here during summer, join their firefly walks!

Do take the opportunity to immerse in the richness of the farm’s natural environment while you are here!
No comments:
Email ThisBlogThis!Share to TwitterShare to FacebookShare to Pinterest

Working in the Mother Nature is kind of relaxing and great experience. Listening to the bird chirping, breathing the fresh air and indulging in the greenery are part and parcel of our working life. A stress free environment is my ideal working place. In the Mother Nature, I am able to discover a lot of rare species of insects and plants. 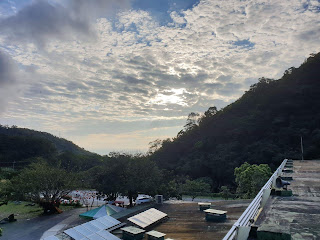 Toucheng Leisure farm is situated at such a geographical area as you will get to see the sun rise from the sea horizon. 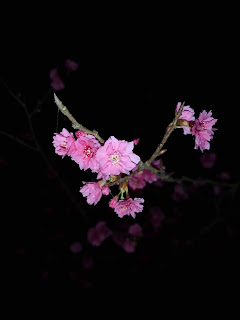 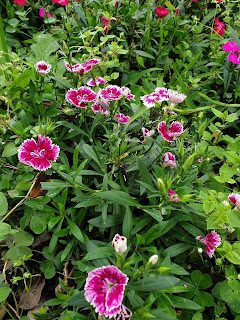 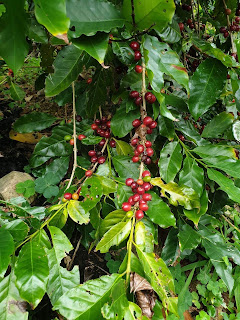 First time eating the coffee bean raw. It surprises me as it taste good and sweet.

Are you tiring of hustle and bustle lifestyle and environment?
Toucheng Leisure Farm @ Yilan is the best choice of vacation for you to enjoy with.
TCFarm has various biodiversity ecosystem for you to explore into the mother nature.
Besides that, you can also view the scenery of sunrise @ Guishan Island 🏝 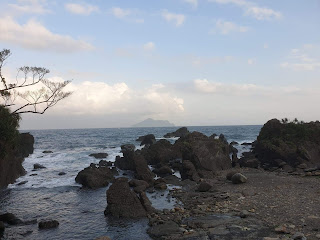 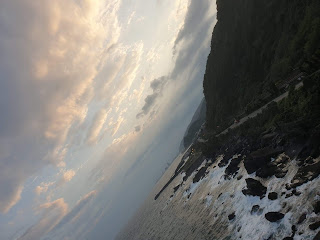 TCFarm provides various activities that themed with seasons. Fortunately, we able to experience the oranges season and taste the fruits on the spot. FYI, TCFarm's orange wins the best oranges award @ Yilan County. 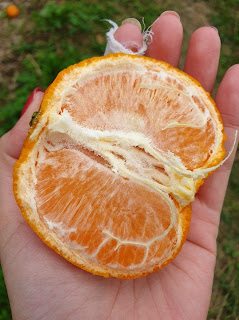 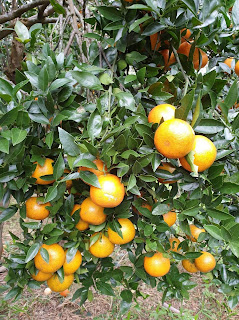 Moreover, we also have the chance to handmade kumquat vinegar and this drink is one of the souvenir for the tourists. 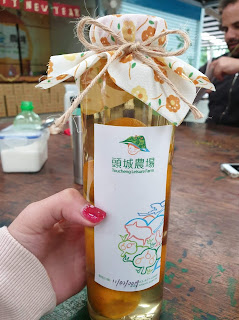 There is also DIY bag or T-shirt for us to design self limited edition souvenir. 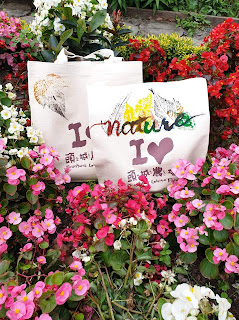 And lastly, we get the chance to make skylight lantern 🏮 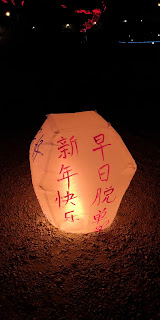 佳淋 佳維
No comments:
Email ThisBlogThis!Share to TwitterShare to FacebookShare to Pinterest

In preparation for the annual Summer Camp, I visited Daxi Fish Port in mid-July with the rest of the summer camp staff (Tina, Hunter, and Ta). We scouted the area to plan a route for the next visit.

As mentioned in the previous post, Ta and I went traveling around Yilan on July 15th. Here's a quick recap of the places we went to after going to Lanyang Museum.

On July 15th, Ta and I went exploring in Yilan. It was our day off and we spontaneously decided that we wanted to travel outside of the farm.

Tina, our supervisor and also dubbed our 'Taiwanese mom', suggested that we visit Lanyang Museum. It is a famous tourist destination in Toucheng with nationally recognized architecture. She gave us tickets and even got us a ride to the museum --about a 20-minute drive from the farm.

When we arrived at the museum we were already hungry (when are we not??) so we filled up at the gift store where they had many Asian snacks. YUM. They also serve lunch boxes at noon if you opt to eat lunch there.

Today I will give you a tour around the farm. It has already been over 3 weeks since arriving at Toucheng Farm so I've gotten to know this place better than before. 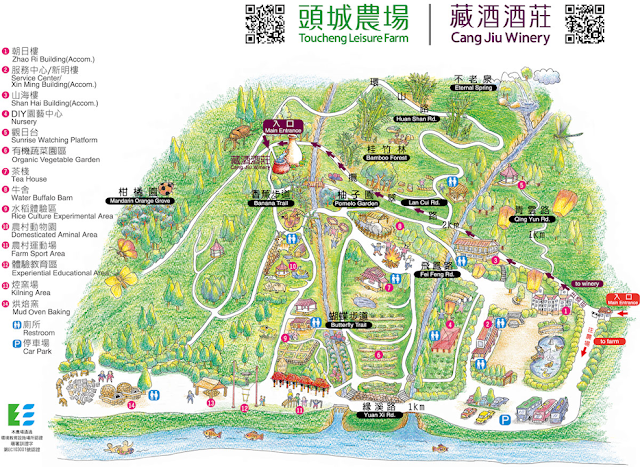 Having dinner at Toucheng night market

Hello, I'm back. I gonna tell you about my first time to go to Toucheng night market. I went there yesterday. Actually I did not mean to go there but my friend, Judy invited me , Candy and Lily to go with the kitchen team ( Judy work in kitchen so she is part of kitchen team) and Peisan (woman who work in the kitchen and I think she is the leader of kitchen team) drove us to night market. Before we went to night market , Peisan dropped us to supermarket because I told her that I wanted to buy hair conditioner. I bought a big pack of Karamujo and hair conditioner. I saw Lily bought milk which have pudding flavour and I wanna try it. Maybe next time I will buy it too >,< 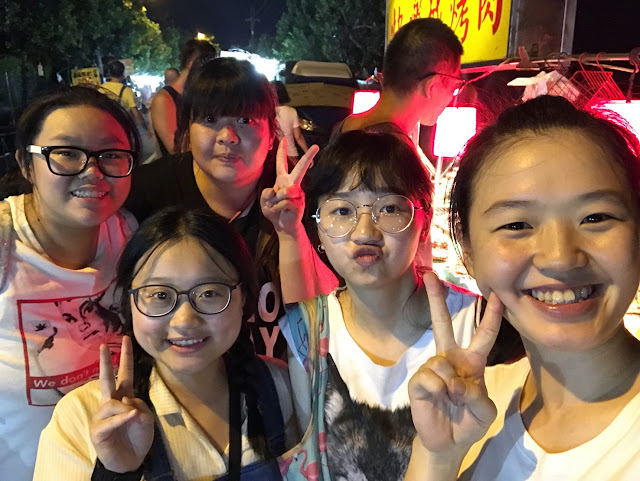 Candy from Canada - Nice to Meet You!

Hello! My name is Candy and I'm from Vancouver, Canada.
For the next 6 weeks I will be staying at Toucheng Leisure Farm as an International Intern through AIESEC (a non-profit organization that sends young people abroad for volunteer and internships). I am ecstatic to share my experiences with you!

Helloooo ~ Sa-wad-dee-kaaaa~ I'm Ta from Thailand. This is my first time to writing a blog post because there is a typhoon outside so I have a lot of time to write... haha

When I first came to the farm, I was not sure if I could work and stay here for 6 weeks because I thought that most interns studied Agriculture or Tourism, but I study a major not related with the farm. Now that I have worked here for a week everything is more clear. I know what my work is and I know that there are many different tasks on the farm; there are many many parts, not just farming or managing the accommodation. For me, my work is to prepare for the summer camp!!! It sounds fun, isn't it?? 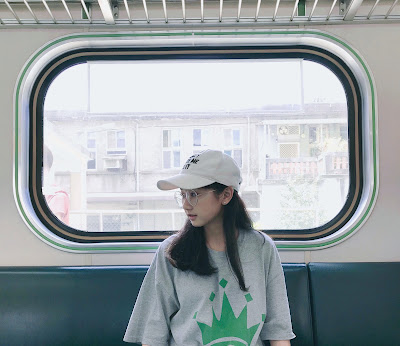